Contacts not listed in chronological order in ADIF Master

I used the updated version of HAMRS and it appears to be stable. I’ve gotten into the habit of running all logs through ADIF Master to double check for errors. I noticed that data is not placed in chronological order and there are cells missing. This seems to be unique to HAMRS since other logging programs don’t exhibit this. It’s not a big problem since all data is clearly visible in HAMRS so running logs through ADIF Master is probably no longer necessary. This is just an observation.

The next release is supposed to fix the QSO sorting issue. Jarrett released the beta test last night so hopefully it will be out soon.

You said some cells were missing as well. Which ones? We’re there blank cells or were entire columns missing?

Yes, I’ve also noticed some empty cells. Usually they are grid squares, operator name, operator grid squares, state, and/or operator county. i have not noticed anything missing that is required for POTA submission.

The QSO operator’s state doesn’t always populate in the HAMRS log. I’ve assumed this is related to the lookup process in QRZ of whatever database is being used. It may be that the search times out before the QSO’s state is determined.

However, if you later edit the log by adding the QSO’s state later, that entry appears out of order in the ADIF Master data sheet. I think all edited entries appear at the bottom of the ADIF Master page in the order they were edited, but even our of order, they will be accepted without problems by POTA. I usually clean these up by double clicking on the “Time-On” header and telling it to “Sort”, but this isn’t really necessary.

As one who receives logs, I am often finding logs that have the BAND cell blank for one contact only. Since, I believe, the BAND cell is applied based on the frequency entered, and the frequency data is always present, it seems odd to me that an occasional contact record will not have a BAND entry.
Michael WA7SKG

@HIKayaker That’s the only thing I’ve noticed, too. Missing fields are either a result of a failed or partial lookup, or for the activator’s info, some fields haven’t been persistent (e.g. county, state, etc.) during prior releases of HAMRS. I understand the latter is being addressed in the next version.

@WA7SKG Thanks for processing logs for POTA! That is a demanding job and I’m sure consumes a lot of personal voluntary hours. Have you inspected the logs to identify the version of HAMRS where a band is missing? That has been a required field for the past several releases, and in fact HAMRS won’t save the QSO unless you’ve entered one. Entering an invalid frequency, such as in kHz when the field clearly asks for MHz, populates the band field anyway with 160m by default. (If the activator isn’t savvy enough to catch that, it’s on them… but at least the log should still process okay.) 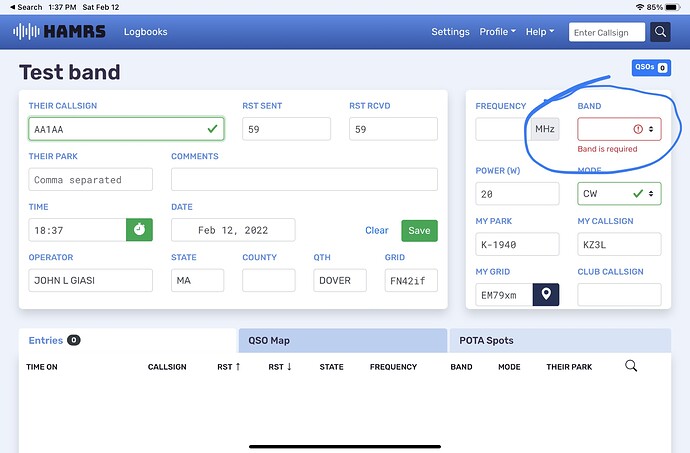 I would love to know what version shows up in the <programversion> field in the ADIF headers for folks that have band missing.

I will try to note that when I run into it again. As it is, I spend, on average, about 1 1/2 hours each day processing logs. Often, I have to get through it as quickly as possible to get on with other events of the day. But I will try to remember to check the version in the future.

This topic was automatically closed 14 days after the last reply. New replies are no longer allowed.