Looking at the QSO map, all of the stations are populating but there is no map picture. Using Android tablet. App is updated and everything is working great with this exception. Do I have a setting messed up? 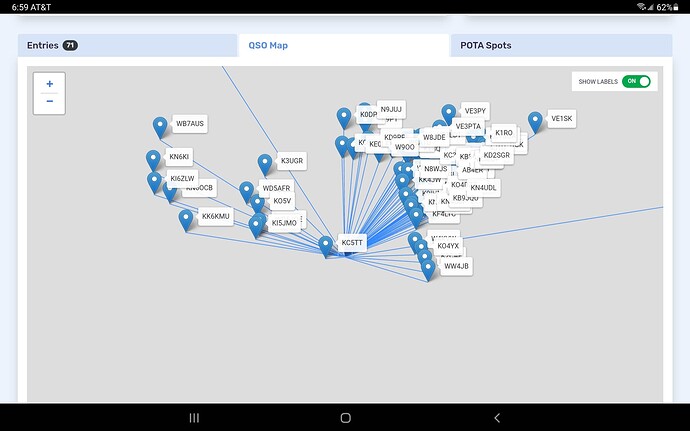 Well that’s a new one. No I don’t think it’s a setting situation - what OS are you using? Looks like Android?

Did you try completely closing the app and restarting it? I can’t seem to replicate this.

About 2 weeks ago I made 2 consecutive activations and the map worked just fine. Today it wouldn’t load up. Attempted to open the old logs that were working before and the map didn’t load on those either.

Can you zoom in a out and see if any map tiles are loaded?

I can zoom all the way in and out and the map does not populate.

I don’t know if any fixes were made, but I opened the app just a few minutes ago and everything seems to be working.

No - no fixes were made. I was able to reproduce the empty map tiles on an older android device, (not old hardware, older version of android), but not on newer devices. Still looking into it - nothing in that area of code has been touched in a while, so I’m stumped.

Could it be a glitch on the OpenStreetMap side of the connection?

This topic was automatically closed 10 days after the last reply. New replies are no longer allowed.